Hey readers! In the series “Travel Nostalgia” I look back on the travel adventures I’ve had with my parents (and friends) in the past. I’ve seen so many amazing things and sometimes I can give advice on where to go and what to skip. Or you’re just here for the pictures, that’s also totally fine! Today I talk about our time in the West of the USA in 2012. Enjoy!

The beginning of our trip – Hollywood

Our roadtrip started in the wonderful LA. Me being only 13 years old, had an obsession with all the popular celebrities at the time. So of course I was industriously looking for all the stars on the Walk of Fame, got a tour around Beverly Hills in a bus, and crossed paths with THE Robert Pattinson!

Yeah no… Not the real one, just someone pretending to be Edward Cullen. I was able to fool all my Facebook friends with the first picture, but the second is too obvious. I do remember seeing the actual garbagebins of Justing Timberlake, being asleep in the bus when we drove by the house of Lady Gaga’s manager, and hearing the tourguide yell “MOTHERFLOWER” at anyone who payed attention to our bus. I think LA is still as weird as it was in 2012, just filled with more influencers.

Most people go to Anaheim to see the Disneyland Park, but it was just a place to stay for the night to us. We did stay awake to see the fireworks though. Correction: I stayed awake. While I was waiting for it to happen, my parents had already fallen asleep. Good times.

We’ve also been to SeaWorld in San Diego. It was definitely beautiful, and I finally touched a dolphin (my favorite animal at the time)! While we did enjoy the show with the orcas, I now know that they had a pretty sad life there.

You can imagine my excitement when I saw the pool when we arrived at our hotel! It had been warm and muggy all day, so even though we came there pretty late, I had to jump in. “Swimming in the dark” had been on my bucketlist for a few years; it was time to cross that off. I have to admit that it was pretty creepy, since I wasn’t able to see the floor. But still, it felt special! Unfortunately a storm came and we had to go inside.

We woke up to see the beautiful sunrise the next morning. We went to the San Jacinto Peak with the Aerial Tramway, and afterwards resumed our trip through the Joshua Tree National Park.

To be honest I can’t really say anything about that. It was just really beautiful, the pictures speak for themselves.

My dad is a huge fan of Easy Rider and the Route 66 and everything else related to it. So here’s the gas station where one of the scenes was filmed..

Absolutely spectacular! We had done a similar trip in the US 2 years before, when we had seen the sunset. Amazing! This time: still amazing. I did feel a bit nauseous from sitting in the car all day, and it was a bit foggier than in 2010. Also: it started to rain 😦 We went to find a restaurant (but found a huge choke-and-puke), and made our way to our accomodation. What I would definitely recommend is watching the stars. It wasn’t possible in 2012, but when we arrived at our motel in 2010, our neighbours were sitting outside and looking at the sky. It was filled with them!

We skipped Monument Valley in 2010, but boy was I glad we didn’t do that this year! Some advice: hire a car that is rock-and-dustproof. Ours was completely covered with red sand.

AGAIN: DO NOT SKIP ANTELOPE CANYON!

A guide took us through the canyon and showed how special it is. I’m not even sure if you can go there without one, but you need a guide to show you the places where the light looks great!

Crazy shit, but what do you expect? There is so much to do and so much to see, but it will possibly drive you insane. We were so overwhelmed we didn’t really take pictures. Some advice: bring enough water with you, don’t go into casino’s with a minor because they will send you away, and lastly: ride the rollercoaster of the New York New York hotel. If you’re a fan of rides and attractions, make sure you also go to the Fremont Street and ride the zipline (we forgot 😦 ). There’s just so much to do!

You can take its name almost literally. It’s a dessert, the lowest place in North-America, and extremely hot. Have you ever turned off a hairdryer because it became too warm? I wish you could do that with the weather; it’s like there’s a hairdryer blowing on your entire body all day long. I get why the pool at our accomodation had to be a little warm, but GOSH it would have been nice to cool off with cold water.

Now I’m not gonna tell you to skip it. True the weather isn’t the best, but the landscape is really beautiful. Besides, most restaurants have sprinklers in which you can take a break from the heat.

Below you will find a mysterious view, a big-ass tree and a peaceful landscape:

I think this is one of the cities in the West I enjoyed the most. I’ve had my first sushi in China Town, so I can be a bit biased 😉 We biked on the Golden Gate Bridge and through Sausalito (which is on the other side of the bridge), went to the famous Pier 39 with some sea lions laying in the sun, and found a rock-balancing artist. We traveled by boat and tram, and I had a great tiramisu one evening (if you don’t know: tiramisu is the love of my life (don’t let Saapjen hear this!)).

It had been so great that I dreamed about going to university in San Francisco. And then I went to Reykjavik and wanted to study there. And then I went to Vancouver. And then to London. And now I study in my own country. Still, I really recommend you to go there. One thing that should be said though: don’t forget sunscreen. Seriously, don’t. It was pretty windy on the bike and I started the day wearing a cardigan. So of course it was easy to forget the sunscreen when I took it off while the wind was blowing in my face. But you have to understand, I’m very very white. I don’t turn brown, I turn red. The sunburn hurt so bad, that it became impossible to take off my shirt. The next day there were blisters all over my shoulders.

The end of our trip – Venice Beach

Venice Beach was so relaxing! We had seen so much that it was nice to unwind there.

Thank you so much for reading. Next week I will share with you our adventures in Marrakech, Morocco! 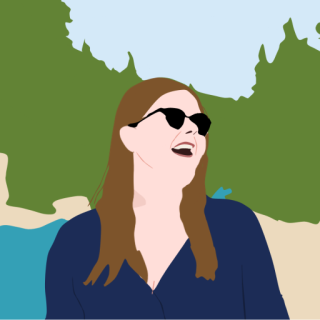